The program is optimized in a 800x600 window, but for fast CPUs you can resize it to larger resolutions.

The classic version is also available on STEAM:
STEAM SHOP

Since 2009 the classic version is also available for your iPhone and iPod touch. Get mobil with POC -- update for the latest iOS in work...
link to the App Store

Release 2.04W:
we did quite a bit for the new windows version, now the performance with slower machines has been optimized, also the CPU is not used up that much in idle times, the keyboard charcaters are now fully mapped. Beside some optimizations also a new feature is available: the game can be started without the ship simulation, a often requested feature - this will come up with a new game started as option, and is also saved with the game.

POC classic is limited to one hour playing time (per start)

Sorry we cannot offer POC classic for free, I am often ask why we charge for such an old game, but also this old version costs us money to updating it for the current state of PCs, and we get many questions by email which we have to answer. We also just released a windows version of the classic version which was necessary to still work with new PCs. We also have to pay for the high download traffic - the alternative is to completly remove POC classic.
Think about getting a classic breadboard game, I think you must pay for this also. Not all can be free of charge. And you still can play one hour and for Pocsilver you get also two hours of the new game... Discussions in the forum about this please if necessary.

But you can play POC classic for one hour without charge and I think it is fair enough to charge you if you want to play such an old game for more than one hour. Anybody how bought an AMIGA version send us a note with a proof of purchase or so and I will send the pocsilver free of charge. (that were not many people that bought it in the past - most had a crack), and we also never got license fee from the distributor at these times.... But the payment for the classic game is also to support us for the new games. Now we have micropayment and I want to use it also for the new games.

buy a pocSilver, pocGold or pocPlatinum license for enabling unlimited playing time and support Ports Of Call and future developments!

If you have registered you get more starting money for the game also (4.5 mio for POCSILVER, 7 mio for POCGOLD and more for POCPLATINUM), we have an upgrade 2.03 after many requests for cheats, this will help, also the start money for non registered users is increased just a little bit. 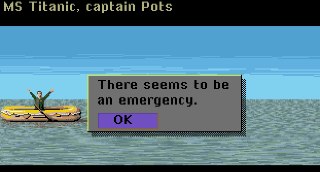 On your exciting journey you can meet shipwrecked mariner, which should be saved to improve your highscore.

Have you saved the shipwrecked? If not take a look at www.rdklein.com in POC FAQs there is an animation to show how to do the rescue. 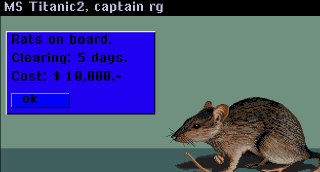 In bad shipconditions rats spread on the ship. 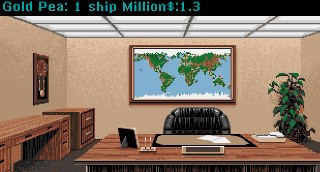 If you are too long on ship journeys it's possible that a burglar will brake into your office. 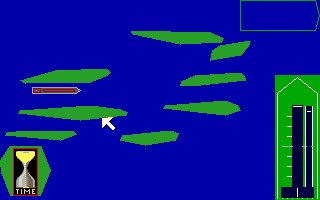 Reefs in the ocean are especially dangerous. 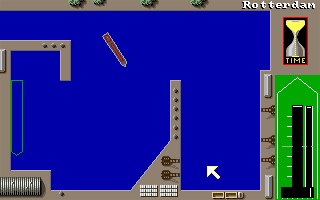 In ports as Rotterdam you must unload your goods and you can do new good business. 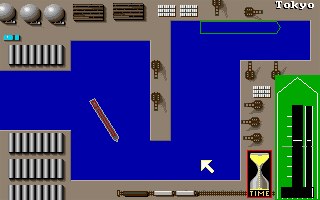 In Tokyo are interesting trade-offers made, too.

On the poles you'll meet some icebergs. 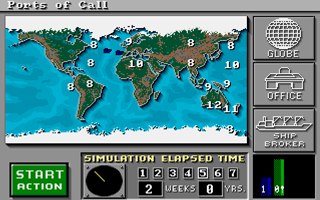 In the main menu you've got a view about the actual ship conditions and the weather. 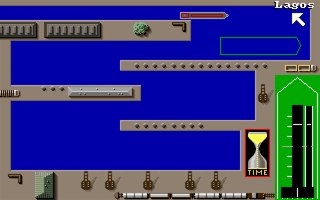 There are also difficult ports to solve.

Here the different languages for download. Save the zip for example to c:\poc. To unzip use pkunzip from DOS (dont use winzip, sometimes shows errors). Then pkunzip POCxxxxx.zip after unzip use POCxxxx.EXE to start the program from the DOS prompt. Warning: DOS-GAME -- use only in DOS-Modus, Attention Win98 Users -- only for experienced Users (better use the new windows version)-- NEVER DOUBLECLICK -- To end the program using the right Mouse key and Quit in the menue or SHIFT Q in the main menue ! DO NOT Reset when using Win98 and have an open DOS Program (this applies to all DOS programs). On certain machines Win 98 does not copy back the autoexec und config. This must be done manualy after this. Win98 stores a backup file for this purpose.

News of our users:
Ports of Call Classic is perfect working with FreeDOS and the xDOSEmu (the DOS Window for Linux).

Then try out it's sequel: Ports of Call XXL